In the ongoing hunt to find the best bagel and lox, I put out a beacon on Facebook for the peeps’ favorite spots.  After about 20 responses, multiple recommendations pointed towards Kaufman’s Deli (4905 Dempster St., Skokie).  Unsurprisingly, an institution in one of the most Jewish populated cities in the country, Kaufman’s prides itself in baking bagels in a traditional fashion for decades.

T for Toasty!
On this trip, it was fairly crowded, but our orders were taken just as we were ready and within five minutes our sandwiches were in hand and ready to rock at one of their counter spots overlooking the busy traffic ridden street outside. 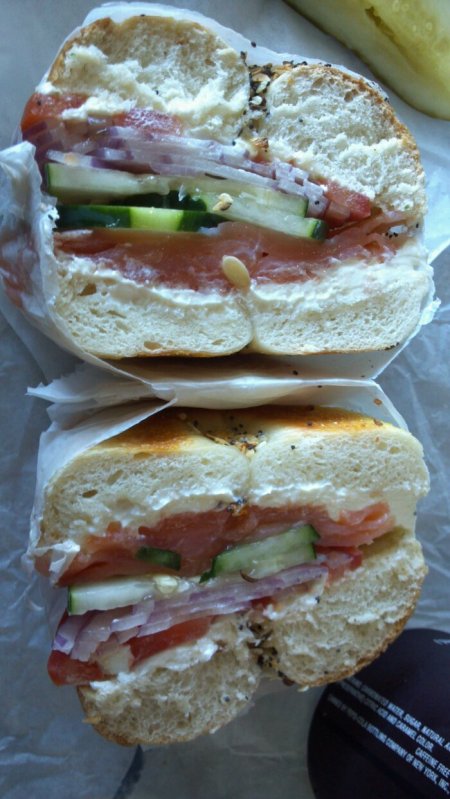 The quality of lox was exquisite.  A generous portion came already assembled on our sandwiches.  Tomato, onion, cucumber were the fixings.  Proportions were spot on and the sandwich itself stayed together during gustation.

Overall, the experience was memorable.  Great bagel, excellent lox, well assembled and worth the coin (about $9).  There are many great bagels in Chicagoland and Kaufman’s is near the top of the list.  Now they just have to stay open 24/7 365 to compete with New York Bagel and Bialy around the corner….Kaufman’s?…