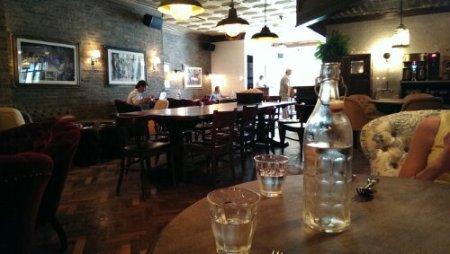 Dillman’s storefront is no stranger to the delicatessen.  Steve’s Deli resided there for a couple years before going under.  It’s a tough location and with only a few great delis in town, we could use a winner in River North.  Well, Chicago-folk, Dillman’s just may be that savior – but only if you want to dine in. 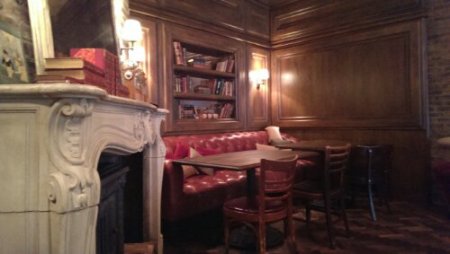 I still consider this a deli RESTAURANT even though they don’t feature a cold  case stocked full of meats and spreads to take home.  All of their wares are in the kitchen to be handled by cooks who will craft you one of the better sandwiches Chicago has to offer.  What makes it even better is the comfy seating.  We were accompanied to a cozy table with two large Victorian style arm chairs – right next to a fire place.  Very nice. 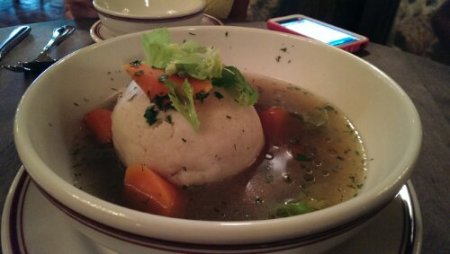 Pictures of the Matzoh Ball Soup looked out of this world.  We ordered it immediately and were served an incredible sized portion of steaming homemade chicken broth, fresh vegetables, and of course, a mammoth, tender, flavorful Matzoh ball. 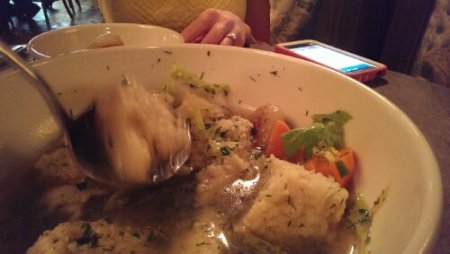 It was so warming.  The broth was well seasoned and the Matzoh ball was fluffy and airy – more so than just about any M-ball I’ve ever tasted. 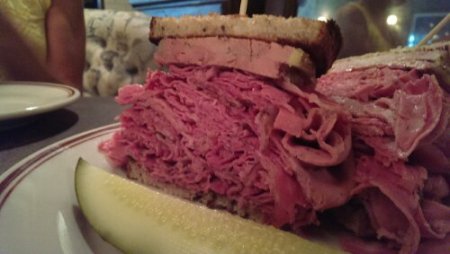 The plan was to split a sandwich.  While we could have ordered the Reuben and I’m sure have been pleasantly full and content, another sandwich caught both our eyes – The Montreal.  Two slices of rye bread, piled high with house made bologna, corned beef and pastrami.  Then they add a slice of sliced foie gras – that’s it.  The menu highly recommends you “share!” this item. 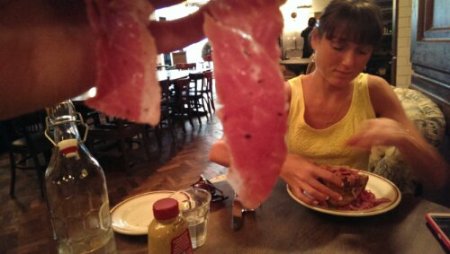 This sandwich sounds like it tiptoes on the threshold of “overkill” when it comes to indulgence – the statement would not be far off.  While it sounds as though you are faced with nothing but meat on meat on meat  on foie, Dillman’s does provide mustard to cut through the richness  Simple, stone ground mustard.  You can easily taste each different layer of the four inch high creation. 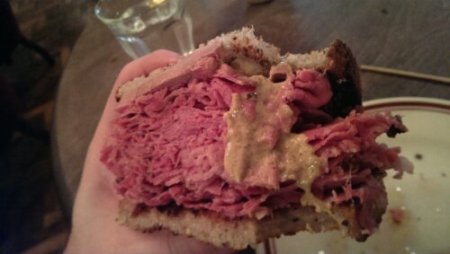 The bologna is light and sliced super thin – the best bologna I’ve ever tasted by far.  The corned beef is fatty enough and sliced thin, too.  Pastrami you can see through with a strong peppercorn quality is just what the sandwich needed.  That would be a killer sandwich even if you stopped there.  But no.  Foie gras, the epitome of decadence is sliced a half inch thick and laid atop for good measure. 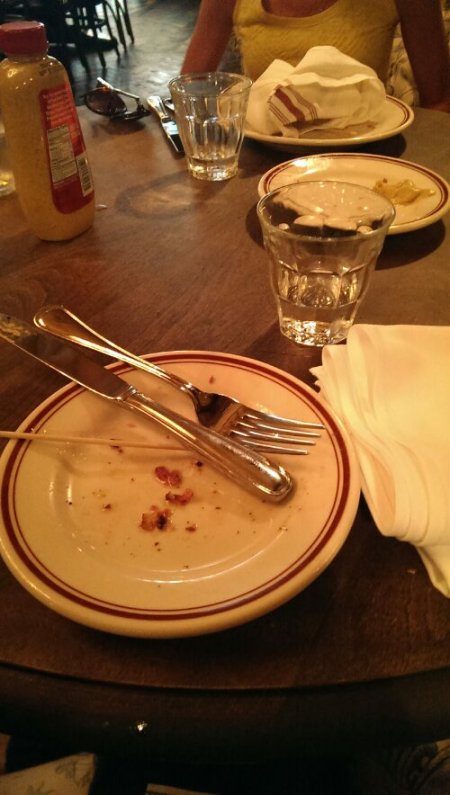 If you like deli sandwiches this is the flagship of the bunch.  It’s worth the $18 price tag and yes…you absolutely should share.