I love a great lox and bagel and up until the last decade or so, the only place to grab freshly cut house smoked Nova Salmon was at a Jewish deli.  Now, with the flourishing of great brunch spots around the city such as M-Henry, Toast and The Bongo Room, the lox and bagel has a new home on a number of excellent menus. 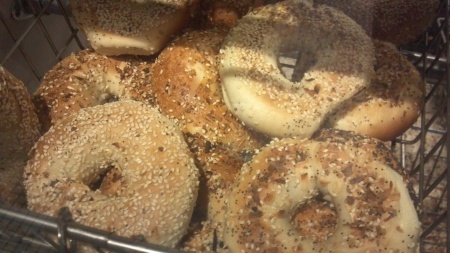 Lula Cafe (2537 N. Kedzie Blvd.) in Logan Square has established itself as one of the premiere lunch destinations not only in Chicagoland, but really the country.  Yeah, they were on the scene way before some of the other guys joined the crowd during the past decade.  Lula has always been sourcing ingredients form local farms when possible and taking the extra time and care to exemplify what brunch cuisine can achieve.

Their lox and bagel sandwich is fantastic.  Their bagels are purchased from Red Hen Bakery just down the road on Milwaukee Avenue near Damen and North.  The light, doughy bagel is covered with all the goodies you’d expect from an “everything.”  Fantastic house cured salmon, airy decadent cream cheese, and of course delicious fresh veggies.  Their whole menu is great, but if you’re looking for a great bagel and lox, this could be your place.

On the other hand, Max’s Delicatessen (191 Skokie Valley Rd., Highland Park) is another viable option when dining on smoked fish.  In business for decades, Max’s has long served one of the best lox platters in Chicago.  Granted, I grew up going to Max’s, I still believe theirs is top notch.  A more firm, traditional bagel, theirs is always well toasted, also accompanied by their house made cream cheese, I take time crafting my delicacy. 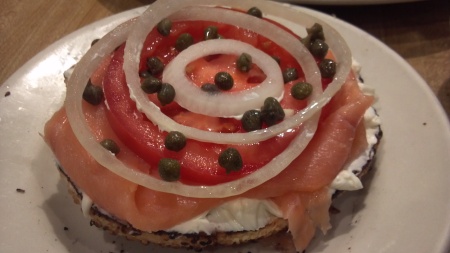 Always hand cut, a plentiful portion is served platter style allowing you to construct your own sandwich.  I always seem to have some leftover slices even after layering more than enough on top of both bagel halves.  The natural oils in the fish are flavorful and set Max’s apart from most other delis. 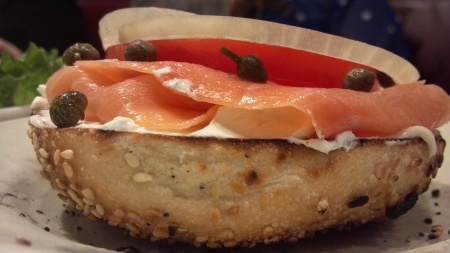 Both your traditional delicatessen and the more modern brunch spot have the potential of serving up some of the best bagel and lox-wiches this side of Nova Scotia.  I suppose it just depends if you want yours served with a side of matzoh ball soup or a “crunchy” granola parfait.