The grilled cheese sandwich.  Simple, right?  Well, it is.  Buttered bread, cheese, browned and melted usually in a skillet or on a flat top.  Done.  Just because something is simple, however, should never mean it can’t be exceptional.  Mars Cheese Castle (2800 W. Frontage Rd. Kenosha, WI) is one of those places just about every Chicagoan has driven by at least once or twice.  Whether heading to or from Milwaukee, or hitting up the outlet malls in Kenosha, Mars is absolutely impossible to miss from the expressway.

Besides a virtual endless array of both local and imported cheeses, spreads and other goods, Mars has a small almost hidden snack counter in the back that serves some toasty and tasty grilled cheese sandwiches.  The deluxe grilled cheese menu features a hand full of different selections each highlighting a different style or variety of cheese.  The specific producer is noted on the menu as I imagine it changes often. 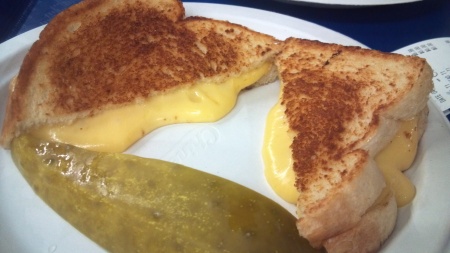 Now even though we’re in Wisconsin, we KNEW we’d be enjoying some local dairy once settled in Milwaukee for the night.  So our first selection was a sweet and salty Dutch Gouda – one of our faves when it comes to melting and textural goodness.

Alright, alright, I suppose one of the two sandwiches should feature a Wisconsin cheese, so we chose a Butterkase from a  farm just down the road.  A mild farmer’s brick cheese, Butterkase melts like a champ, provides a creamy element with just a touch of flavor.  Really nice for sandwiches and one of my favorite burgers in the area (Jam) uses it to top their house ground patties.

Both cheeses melted to perfection.  The simple buttered white bread was toasted nicely and evenly.  Both sandwiches were oozing and came nice and hot from the flat top.  The Gouda was nice and salty while the Butterkase more mild and creamy.  Not life changing sandwiches, but they aren’t meant to be.  What they are is a a pair of excellent grilled cheese sandwiches of which any good home cook would be proud.