Buffalo Joe’s (812 Clark St.) in downtown Evanston is another one of those spots that if you grew up on the North Shore, you were most definitely a frequent visitor to take on some wings and cheddar chips.  Known simply as Buff Joe’s to most, their recipe for success has been going strong for as long as I’ve lived in Chicagoland.  Most of the staff has been the same since I’ve frequented the place starting in the late nineties.  The menu board as well as most of the restaurant have too remained untouched to this day.

Their ordering pad is legendary in my book.  Placing your order at Buff Joe’s can be somewhat like the Soup Nazi – you’d better know what you want when you get to the front or “No wings for you!”  Single order, double order, or the infamous pan.  Back in my finest days I could take down a double order plus their killer cheddar chips – essentially waffle fries doused in real thick cheddar cheese sauce. 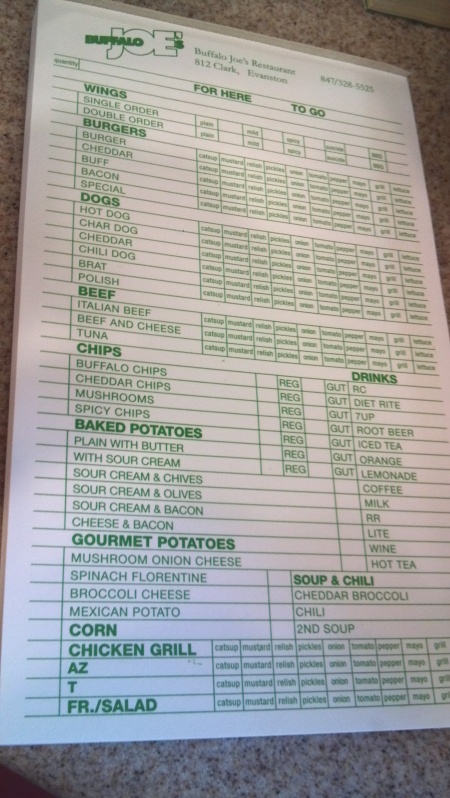 Today, though, a single order is plenty.  Their sauce is offered in multiple levels of heat, as you’d imagine.  I always opt for the suicide.  They use a Frank’s Red Hot base for their sauce.  It’s a simple but extremely balanced and flavorful hot sauce and to make it “suicide,” they finish it with a generous downpour of pickled jalapeno peppers, which themselves are completely coated in the tangy vibrant red liquid. 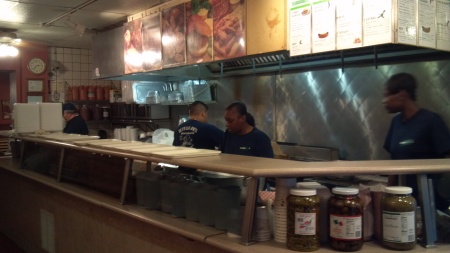 You can watch as they prepare your order behind the cafeteria style line of trays all in a row awaiting their passengers of tastiness.  As I watch them toss my wings in the suicide sauce I think of how many chicken have parted ways with this earth for Buff Joe’s alone.  I wonder how long they’ve used the same large mixing bowls to evenly mix their sauce on the bird.  I’m in a trance only to be snapped out of it by the loud calling of my name, “SCOTT!”  My order was ready. 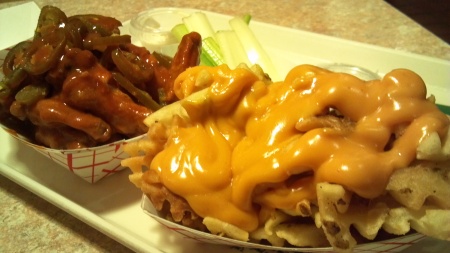 The wings are naked, which I prefer, and come nicely cooked with a slight crunch to the skin, but extremely moist and hot inside.  The chicken is of high quality, no gristle or weird bites at all and it arrives piping hot – you have to wait a few seconds to take the first incredible bite.  I’ll be the first to call out Buff Joe’s on having smaller sized wings than they did when I was in high school and even college, but their recipe for overall deliciousness is still in place – and that’s what counts.  One surprise to many that I’ve grown used to – no blue cheese, only ranch.  Oh well. 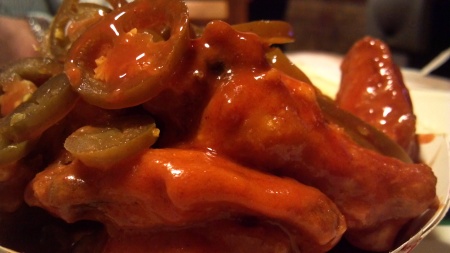 Their cheddar chips are large thick cuts of waffle fry, topped with a complete sheet of real cheddar cheese sauce.  Dare I say that MAYBE, just MAYBE, as many people go to Buff Joe’s for the cheddar chips than they do wings.  Okay, there – I said it!  Now if you’re out there thinking I’m insane, then you probably haven’t had the dish.

It’s always nice to go back to somewhere that has a warm spot in your heart – especially when it’s food related.  The wings at Buff Joe’s are excellent, though a bit smaller than they used to be.  The fact that they still only serve Royal Crown products is too something that makes me smile.  Buff Joe’s is one of those joints that will be open 50 years from now serving North Shore regulars and Northwestern students.  Fry on Joe.  Fry on. 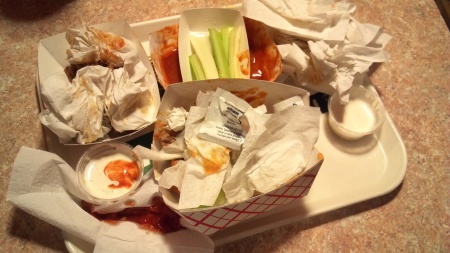