Jill and I were wandering the area near Armitage and Halsted and Yelp! once again led us to a completely unknown food spot.  It’s easy to miss Armitage Pizzeria (711 W. Armitage Ave.).  A stairway leads up to a small storefront with a small counter, an even smaller pizza work space, and a gas oven that was carefully selected for the style of pizza. 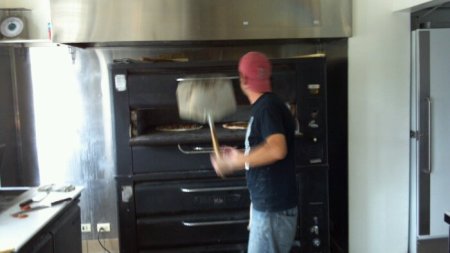 Jay is a man who genuinely loves his craft and this isn’t his first rodeo.  He began his career creating the pizzas for Coalfire across town.  This pie is a similar recipe just using the gas oven – the cooking method Jay prefers. 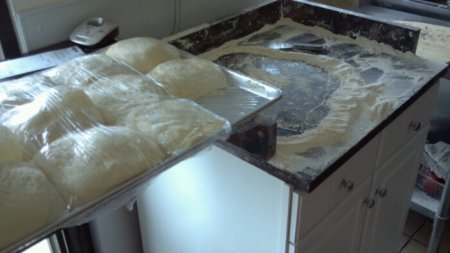 We walked in just after they opened around 3 pm on a weekday – they open at noon Saturday and Sunday.  Jay was tossing his first pizza of the day – this pie was for slices.

He only offers cheese by the slice because his whole pizzas are so friggin’ cheap!  Every pie is made by hand using high quality ingredients.  He doesn’t like to call his product New York style because it’s a little different – similar – but the crust is more of a New England or as Jay put it, East coast style.  A thin slightly crispy crunch with a doughy chewy crust is what he’s trying to achieve.

The pizza is a little greasy – which is great – with flavorful cheese, plus his sausage comes from Bari Deli (previous post), which, in my opinion, is one of the best sausages in town.  He’s the only employee and since it takes a few moments to make a pizza, you may have to be patient if you want a slice.  As long as you give him 20-30, though, you can have your own pizza pie, fresh out of the oven. 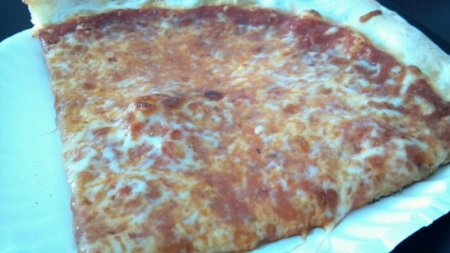 We ended up chatting with Jay for a while – such a nice guy.  In fact, he was about to let us leave without paying for our meal!  We were so involved in our conversation WE had to remind him we hadn’t paid.  We can’t recommend Armitage Pizzeria enough.  It’s super tasty, really reasonably priced and Jay is the kind of neighborhood guy you want to support.