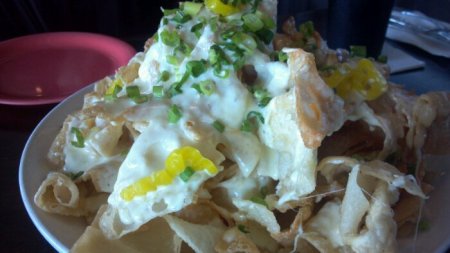 Pilot Pete’s (905 W. Irving Park Rd., Schaumburg) is housed at the quaint, private Schaumburg airport.  It’s been there for years and is often crowded on the weekends, but it’s a prime spot to grab some great food for lunch and dinner when out in that area.  Incidentally, it’s the sister restaurant of The Tavern Grill also in Schaumburg which serves (as previously stated) the best chicken fingers on the planet.

While they serve the exact same recipe chicken fingers at Pilot Pete’s, we opted to try something different on this trip.  The Hong Kong Nachos were noted on the menu as being a house specialty – our server agreed they were awesome and unique.

Yup.  They were.  It was East meets West at its best.  Fried won tons are topped with a creamy prosciutto Bechamel sauce, banana pepper rings, and Asiago and Parmesan cheese.  The dish was intense.  The won tons were fried well, not overdone and they held on to all the toppings even better than most fried tortilla chips.

The sauce was creamy and smoky.  You definitely could taste the nice prosciutto flavor.  The banana pepper rings, as you’d imagine, provided a necessary vinegar tang to cut through the rich cheeses and sauce.  They were crunchy and brought just the right amount of heat to the table.  The cheeses added a googey element that worked well with the sauce.  The Asiago gave it a sharp kick on the back end that was a thoughtful finale to the experience.  While it’s a long drive to the burbs for just nachos and maybe some chicken fingers (duh), if you make a lil’ day out of it with a movie or shopping, it’s well worth the travel time.