Sometimes a great way we’ve come across cool food spots is through site like Groupon, Living Social and most recently, Bloomspot.  We purchased a $30 for $60 for an upscale Chinese restaurant in River North that had a reputation for being pricey but innovative and high quality dishes.

We went to Red Violet (121 W. Hubbard St.) right after our respective shifts for an early dinner.  It was cooling down and their patio out front was shaded so we were down for al fresco post trabajo.  Our server Kate was friendly and excited about the menu.  We were lucky to have gone on that day because three days later their entire menu was changing, PLUS they would be closed for two days to prepare for the transition.

I appreciate a place that serves its water with cucumber.  In my opinion totally superior to lime or lemon, a cucumber is refreshing, clean and lends that slight herbaceous note that I think most enjoy over the citrus variety.

Spicy kimchee was served as an amuse family style.  It was crunchy, fresh and had just the right amount of kick.  It was a clean, light way to get the palate ready for some of the more complex flavors Red Violet has to offer.

We started our meal with calamari as we do with many a day.  Their crispy salt and pepper tentacles and tubes are wok tossed with sesame and dry red peppers.

The app is finished with sliced and slightly charred jalapeno peppers.  For the spice lover in me I always like when a place serves peppers with their fried seafood. 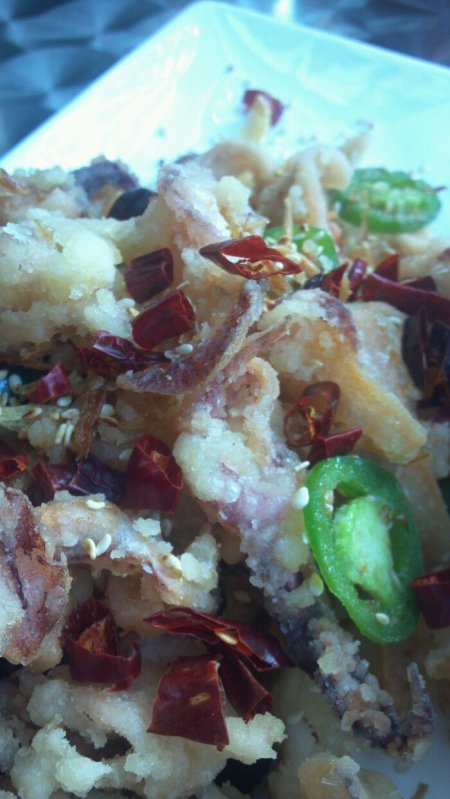 When paired with one of the two dipping sauce it just takes the simple calamari to the next level.  One sweet and and sour sauce as well as a refreshingly light aioli are served with the little fellers.

Jill ordered the seafood flat rice noodle.  A fried noodle similar to chow fun that was a very large portion of scallops and super sweet basil leaf in a slurry of well fried flat noodles.  Finished with sesame seeds this was not your traditionally flavored noodle.  There was an overwhelming essence of basil that penetrated every inch of the entree in the best of ways.  While it was so present, it still complimented the plate as a whole.  Wonderful.

I went with two smaller noodle options – and I rarely don’t order an entree featuring a large piece of meat in this situation – that’s how yummy these two dishes sounded.  First, was the Sichuan dan dan noodle as recommended by Kate.

The dish is interactive as the minced pork in red chili sauce lays underneath the clean white almost plain looking noodles with freshly chopped scallions – a generous portion of crushed peanuts come on the side.  You mix up the red chili sauce and pork as you eat your way through the noodles. 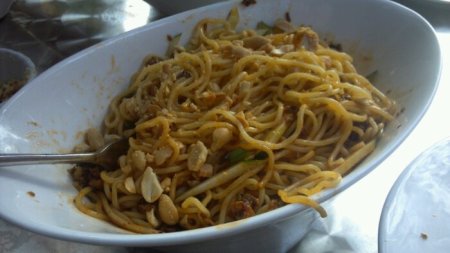 The depth of flavor in the chili sauce is excellent and the pork is flavorful and minced which allows it to cling easily to the noodles.  Exemplifying the simplicity in noodles from a few simple ingredients in the right amounts that can create a dish so much more than the sum of its parts.  I would order this again in a heartbeat.

My other noodle dish which, believe it or not, was EQUALLY as good was the black truffle egg noodles.  Prepared with both black truffle oil and salt, wild mushrooms and a strong helping of black pepper, the pasta is simple and rich with peppery, earthy flavors.

The truffle is not overpowering, which really made the dish as good as it was.  If the truffle were the only thing you could taste, the black pepper and earth of the shrooms would have been lost.  Again, another dish I’d order and NOT just because of the truffle.  As a whole, the ingredients allowed each other to come to the forefront in their own ways.

We planned our attack and asked for a dessert menu with the regular menu to ensure we spent our money in the best way possible.  We were excited to get to the Salted Caramel Crunch Cake…which was bonkers.  A nice light and airy cake with a layer of crispy salted caramel and wafer. 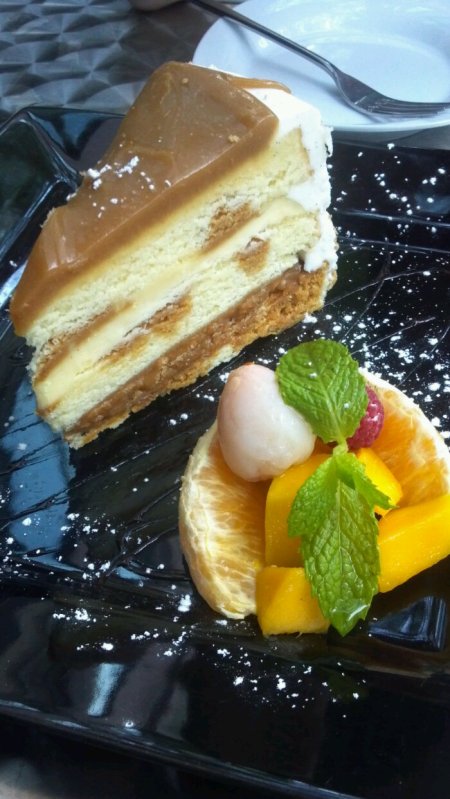 Before leaving we both checked out the restroom as well as the rest of the restaurant.  The space inside is really nice.  Two levels are filled with elegant and modern fixtures and furniture.  The lower level has an intimate feel with both lounge couches as well as tables.  An awesome private dining space featured a large round table that housed a super sized marble Lazy Susan.  Stunning to say the least.

Again, we were so glad we went in on the last day of service before their new menu rolls out.  As we understand it, there will be a  condensed offering of the current selections priced a bit more economically.  I’m sure either way, Red Violet will do well as long as the public knows what they’re up to.