You’ll find Solly’s Grill (4629 N. Port Washington Rd.) about ten minutes from downtown Milwaukee.  Opening their doors in 1936, Solly’s is the creator of the now famous Butterburger.  You’ll find variations all across the Midwest – Culver’s, the quick service version.

Solly’s is a counter only establishment – maybe there was a small table or two, but let’s just say COUNTER ONLY.  The menu is super old school.  I imagine the items have barely changed since the thirties, the price has increased only a bit – still a fantastic deal at $4 for a delicious burger.

Jill and I were able to get two of the last spots at the “W” shaped counter front and center as you enter the tiny building.  We looked around and could tell that just about everyone enjoying their Butterburgers were regulars.  Fries and onion rings all around. 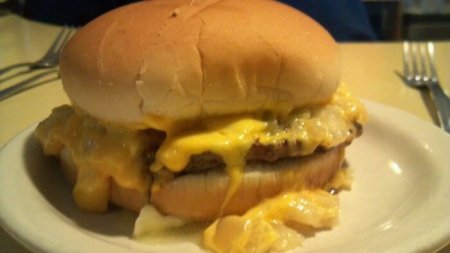 Normally, I would’ve gone with two patties with the flat top style of burger, but as we were food hopping and needed to pace ourselves, a single it will be. While most butter burger places brush their butter, in liquid form, on a toasted bun, Solly’s schmears on a generous helping of real Wisconsin butter. At Solly’s butter is THE condiment – not a gimick.

When Jill n I thought about the idea of that much butter atop a burger, admittedly we were a bit unsettled. I mean, THAT much butter on something like a burger can’t be that good right? No fear, they were the most memorable bites of the trip I kid you NOT!

A simple white bun is so soft and perfect for housing a 1/4 lb patty of fresh locally sourced beef, chopped “stewed” Spanish onions – not caramelized but just translucent and just right.

Wisconsin American cheese is melted across the top of the patty just before the lightly toasted and sinfully buttered bun caps the creation.

At first bite, Jill and I looked at each other simultaneously…oh, my goodness. Not only was it so so much better than we could have possibly expected, but it absolutely WAS one of the better burgers, butter or not, that either of us had tasted in a lil while – no small feet I say. 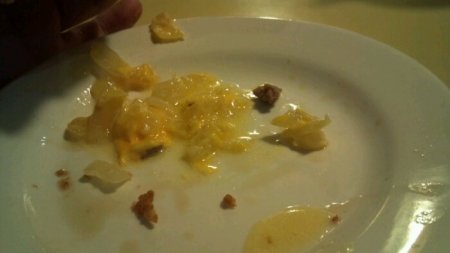 We split the burger and could have easily dominated a double, but that would have to wait until next time.  Each and every bite was pure bliss.  The sweet salty butter complimented the meat so well.  The onions were just right, again not caramelized so there was no charred flavor in this sandwich.  Solly’s hasn’t changed a thing about the way their Butter Burgers are prepared since opening 76 friggin’ years ago.  This is the epitome of “if it ain’t broke, don’t fix it.”  Amen.