Day five.  We awoke still feeling full from the previous day.  But this is vacation time brotha, so let’s rally for another insane day of eating and wine consumption.  The last thing I expected, though, was the French style breakfast Jill had prepared for us.  An awesome plate of cured meats and delicious cheese with local bread!  Uh, yes please.

All purchased the day before from the Fatted Calf Butcher in Napa, the spread of meat and cheese was the perfect savory way to get the day going.  Thin sliced house roasted beef, prosciutto, salami and a killer duck rillette – duck served in its own fat – yup, awesomeness.  Also, there was a brie style cheese along with two other harder selections – don’t remember what kind.  Delicious.  This is one cultural difference on which the French have an up on us.

We drove back over to the Sonoma area and met up with Victoria Bevan, Russell Bevan’s wife, the proprietor of Bevan Cellars.  Bevan produces extremely high end and limited production wine – predominantly Cabernet Sauvignon.

We tasted through their Jemrose, Wren Hop and Bevan portfolio right out front on some picnic tables.  The Jemrose line up consisted of a Viognier that was excellent – one of the better California has to offer, as well as a Syrah and a Merlot blend both of which were delicious and accessible. 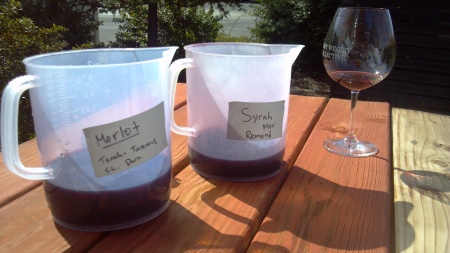 We drove into downtown Sonoma and swung by Willi’s Wine Bar, a local favorite for restaurant staff and foodies alike.  We sat on the patio and immediately put in an order of bone marrow to start along with pork belly Mu Shu pancakes – two of our favorite things – go.

The bone marrow was an incredibly generous portion.  They were large, meaty and cooked properly.  The marrow was easy to access and was seasoned properly.  Nothing’s worse than bone marrow from an un-halved bone that hasn’t been seasoned at all. The fig jam and sea salt served along side took the dish to the next level. These were quality bones.  One of the better marrow dishes we’d tasted.

Next came the pork belly mu shu pancakes.  The pancakes were delicate and served nice and warm.  The pork belly slices were just the right thickness, charred a bit on the outside and perfectly moist and tender throughout. 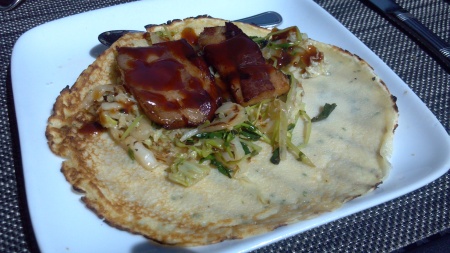 Served with a tangy slaw that balanced out the rich pork belly, the chive and shiso “crepes” were also accompanied by a tangy BBQ Hoisin sauce that was both familiar yet made unique with a sweeter touch unlike other traditional Hoisin.

The mac n cheese we ordered arrived in a small mason jar, literally overflowing onto the liner plate.  Prepared with sweet peas and spring onions, the pasta was al dente and the cheese was just oozy enough without being over the top.  A light dusting of breadcrumbs was the finishing touch to a super solid mac n cheese. 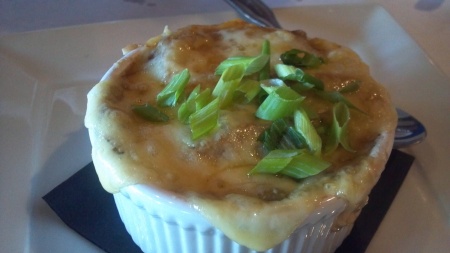 After paying the check we swung through Guy Fieri’s original restaurant Johnny Garlic’s just so we can say we were there.  Pretty straight forward bar food as far as quality is concerned.  Standard fried chili lime calamari were decent. 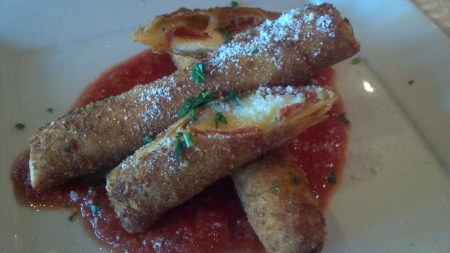 The pepperoni mozzarella sticks we ordered were probably my favorite item.  Won ton style sticks were stuffed with plenty of mozzarella cheese, pepperoni and came with a warm marinara dipping sauce.  They were pretty solid – just as one would expect.  Jill ordered a French onion soup that was straight forward, but still tasty.  We got our fill and hit the road again. 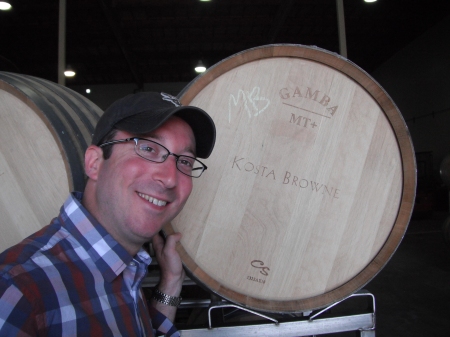 Our PM appointment was with Michael Browne at Kosta Browne winery, one of the premiere Pinot Noir producers in all of California, if not the World.  Michael welcomed us in a bustling busy warehouse outside Sonoma.  As he uses completely purchased fruit in his wines, he doesn’t need to be by a vineyard – this large building is his home away from home.

We were shown around the facility while dodging fork lifts and large crates of grapes being brought in from all over Sonoma.  We were given a special opportunity to punch down the cap of a fermenting vat of 2012 Sonoma Coast Pinot Noir grapes!  So damn cool!

You could feel the warmth of the fermentation process as you push your hand down deep into the juice.  Jill stained her all white shirt, but didn’t care one bit.  The experience was one of the coolest we’d had on the trip thus far!

We tasted through the rare and stellar set of Chardonnay, Pinot and one Syrah produced by Kosta Browne.  Every wine was full of excellent fruit, earth and spice.  All of their wines are World Class and have a certain sweet, yet stylish and well polished qualities that are adored by many wine geeks and novices everywhere.

After we tasted through KB wines, Michael told us about a new project he’s working on called Cirq.  Another Pinot bottling he will be doing under his new label.  He had the six different plots of Pinot in small vials ready to be sampled out the following day with Wine Spectator critic James Laube. 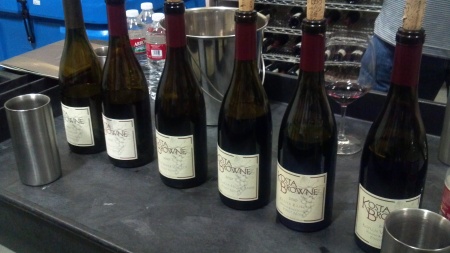 But by the end of our tasting, he had offered to let us sample through the six different lots.  Just when we thought our visit couldn’t get any cooler, he began to blend those six lots in his glass when finally he nodded in approval and poured a nice few sips into each of our awaiting goblets.  This was to be the blend of Cirq – not to be released until 2014.  Another exclusive glimpse at a wine no one else has tasted. 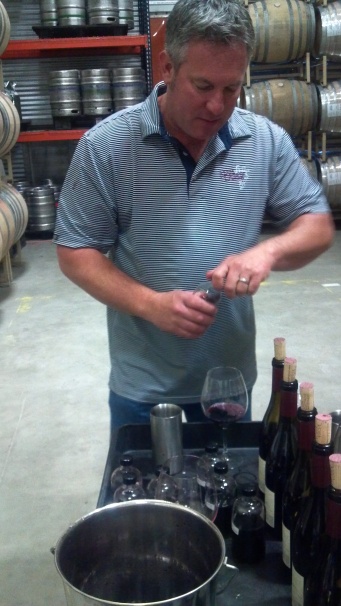 Again, when he found out about our engagement, he decided to give us a bottle of juice as a gift.  He too was kind enough to sign the bottle to us.  A special bottle for a special occasion.  What an experience – and without even walking through a vineyard. 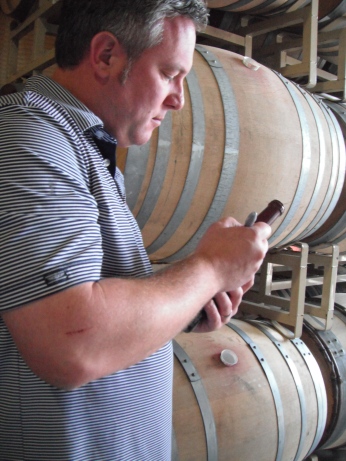 Dinner would be low key.  We felt like diner food.  Black Bear Diner.  Perfect.  With multiple locations here and there around Northern California, Black Bear puts out quality diner food in a relaxed and clean diner atmosphere.  It was exactly what we were looking for.

Their menu is absolutely ENDLESS…but, luckily, they’re known for their chicken fried steak.  Done.  A massive thick cut steak that’s been battered and fried and topped with their homemade sausage gravy.  It was filling, fried just right, and the gravy was clearly home made and frankly, spot on.

We also ordered their Reuben sandy.  Their corned beef was absolutely done in house and they had the sense to throw it on the griddle for a few to give it a nice sear.  Put together with care, the proportions of ingredients was correct and the quality of sauerkraut, bread and even the sharper Swiss cheese was a nice surprise – finding such product at a silly fair price.

Call it a day.