The sandwich.  Without a doubt this is my favorite genre of cuisine if you will.  You have your classic, standards for lunch – the B.L.T., Tuna Melt and the Grilled Cheese.  Then you have your dinner specialties we’ll say the burger, steak sandwich and Reuben.  Then we have Brunch.  Yeah, there’s the traditional Pancakes, Eggs Benedict and French Toast, but this meal period is often overlooked when it comes to specialties between two slices of bread.

I have already covered at length the lox and bagel sandwich, so now it’s time for the other delicacy I search out when in the mood for something indulgent yet still somehow not as filling as, say, any of the  three aforementioned Brunch specialties – The Croque Madame. 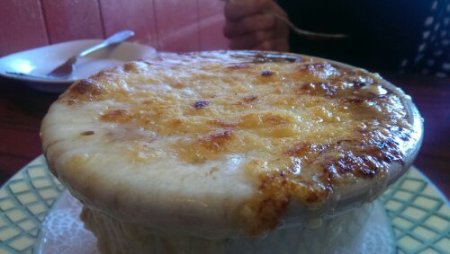 Before we get to the main event, I absolutely cannot ignore Le Bouchon’s French Onion Soup.  This IS without a doubt one of the best incarnations of this French Bistro staple.  Le Bouchon’s broth is rich in flavor, but definitely not too Sherry forward or dark. 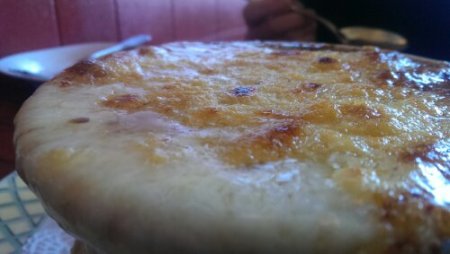 The onions are cooked down enough so they melt away the moment your tongue presses them against the roof of your mouth.
They use a deliciously sharp and flavorful Gruyere cheese, and they use plenty of it!  The crock has a very wide mouth which creates even more surface area for gooey melted cheese.

Crispy brown, the cauldron was still bubbling hot when it arrived promptly at the table.  The quantity of broth to cheese to onion is also spot on.  There’s nothing worse than getting a soup that is short on broth or doesn’t have nearly enough cheese.  I mean, really, isn’t it AT LEAST 50% about the cheese?! 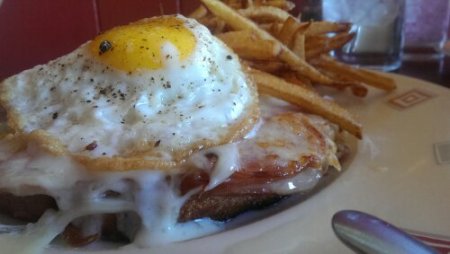 Okay, Croque time.  I have sampled this French sandwich dozens of times across the country and even in Paris. While overseas I tasted a Croque Madame at two different street carts and also at two separate bistros for lunch. Additionally, while at school in upstate New York, I ventured to Montreal on several occasions to sample their wares.  All of the above were outstanding examples.  Le Bouchon, however, trumps them all.

They use a thick cut loaf that holds up to all the toppings.  They start with a house made ham that is hand carved to a perfect thickness, then layered on the bread.  The cheese they source is once again extremely rich in flavor and adds a nice edge when combined with their spicy stone ground mustard sauce.  As with all Croque Madame, a perfectly fried sunny-side up egg is gently laid atop the creation.  Done.

There isn’t much more to say.  If you’re a fan of this delicious Brunch edible, Le Bouchon is a sure bet in our fair city.