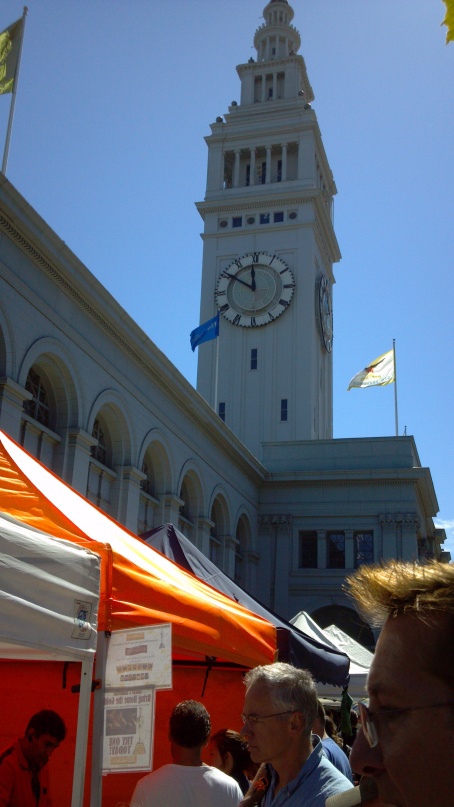 For those in the know, the Ferry Building on the San Francisco waterfront is a small Mecca for the food lover.  They turned a monstrous old warehouse style building into a food stall bizaar featuring different cuisines to suit anyone’s craving. 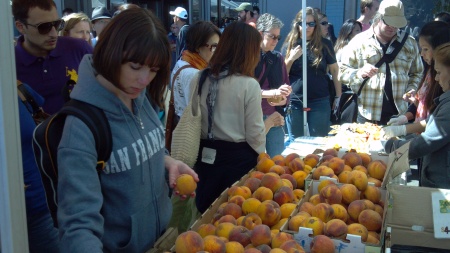 On Saturdays, one of the better farmers markets in the area is also staged just outside the building.  While the market is absolutely one of the best I’ve visited with fresh produce, cheeses and meats with enough samples to fill you up, the main event are the permanent fixtures indoors. 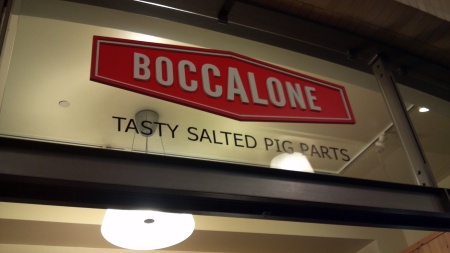 Chris Cosentino’s Boccalone was our first pit stop.  Salted pig parts is their specialty in the form of sandwiches and plain ol’ sliced meat – the gluten free route.  We had to try one of their specialty “meat cones” – it’s what they’re most known for. 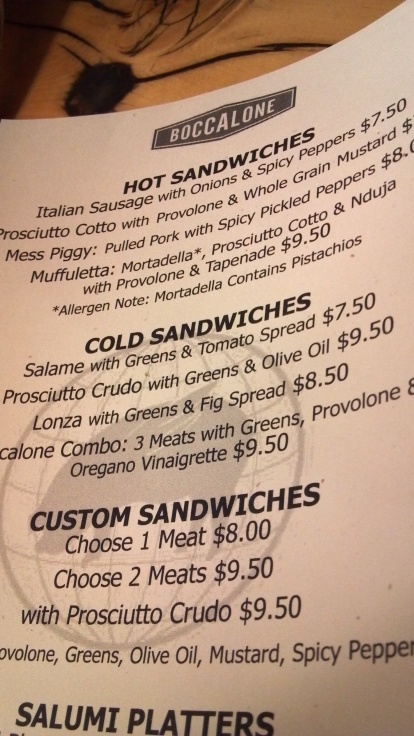 You’re presented a snow cone of pig – heavenly.  Mortadella, house made salami, capocollo, and prosciutto cotto are ringed around a paper cone cup and handed to guests like a little kiddie and his ice cream cone.  We disassembled the cone and went at each thinly sliced piece of meat separately. 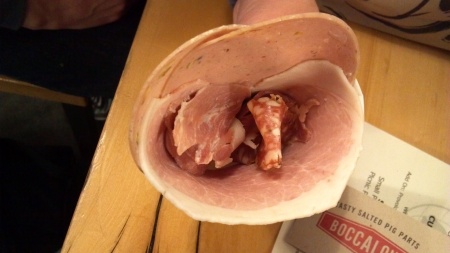 Different flavors and textures were highlighted in each cut. The mortadella had small pieces of pistachio and had a soft almost creamy mild flavor.  The salami was zesty and spicy.  The meat was coarse ground, which we both appreciated, being able to bite down on different parts of the pork. 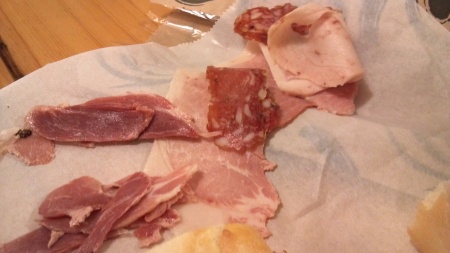 The capocollo was unctuous and really smoky.  Nice rich piggy flavor was the focus on this cut, more so than the texture.  Finally, the prosciutto was deliciously fatty and cut paper paper thin.  The meat cup IS the best way to sample the wares that this fine shop has to offer. 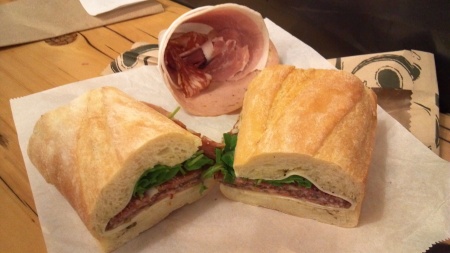 After some guidance by the gentleman taking orders, we were steered towards the Boccalone Combo sandwich with greens and an herbaceous oregano vinaigrette.  Served on a nice soft Italian sub roll, the sandwich came with three different types of salami, more capocollo and the addition of the super sharp provolone is just what was needed to take the sandwich from great to excellent. 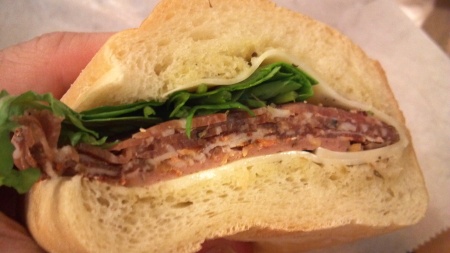 It was easy to eat, filling and extremely fresh.  You could taste the different meats neatly stacked between the bread, and the vinaigrette gave the sandwich nice moisture and some zesty acidity. 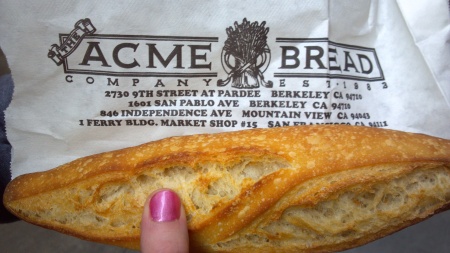 Right next door to Boccalone is the Acme Bread Company.  They prepare dozens of different pastry items for hungry tourists and locals wanting to get some well made, crispy warm bread.  A simple mini baguette was our selection as we knew more food was in our near future.  It was simple, fresh and just what was needed wrap our heads around the Acme Bread Company. 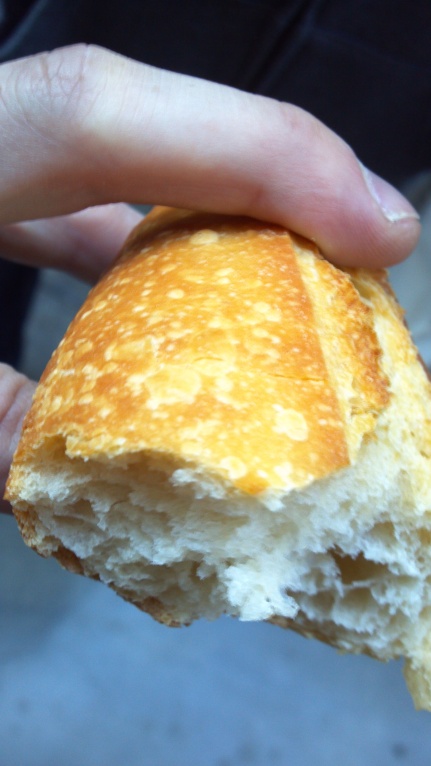 Blue Bottle Coffee is known to be one of, if not THE BEST coffee shops in the country.  People wait in line for up to thirty minutes for a simple cup of coffee…this included me.  I, however, was given the in ahead of time and lined up at the “express” window on the side of the shop. 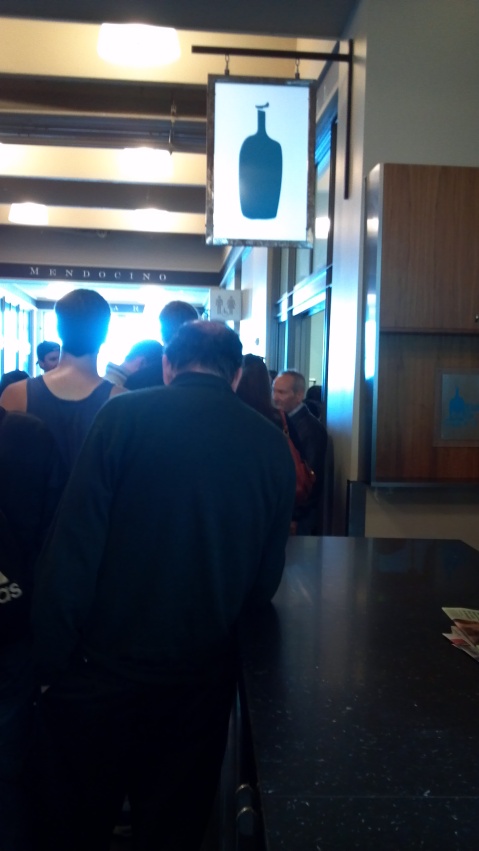 Granted, it was a shorter line, I still waited for about 20 minutes.  Not only does Blue Bottle use some of the best beans available anywhere, but method of brewing each cup by straining it through a specially designed contraption combined create that superior coffee. 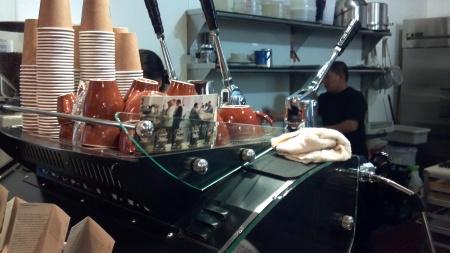 Instead of getting a simple cup of Joe, I order the Affogato.  Two glorious scoops of Humphrey Slocombe Ice Cream (the city’s finest) topped with a generous shot of Blue Bottle’s signature espresso. 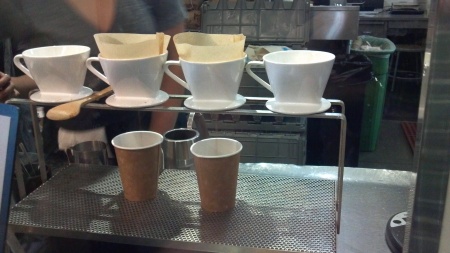 Now, I’m not a coffee lover by any means.  It’s not that I don’t like it, I just don’t drink it.  But this…was…incredible.  So creamy, the sweet ice cream took much of the bitter qualities out of the espresso and the hot cold contrast was spot on.  Loved it. 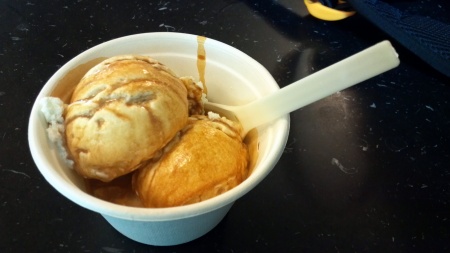 Both the ice cream and coffee were so so rich.  This was decadent, but totally necessary.  Don’t miss the Affogato if you stop by Blue Bottle…it’s worth it, plus you’ve just waited 30 minutes – make it count.

Still hungry?…Yes, somehow WE were.  Next – Gott’s Roadside.  A staple up in Napa Valley, we were too close to not try one of their famous burgers.  We weren’t 100% sure we’d have time to hit it up in Napa, so why take the chance.  We were there and ready for beef.  The hot line was clearly set up for a super high volume high efficiency operation. 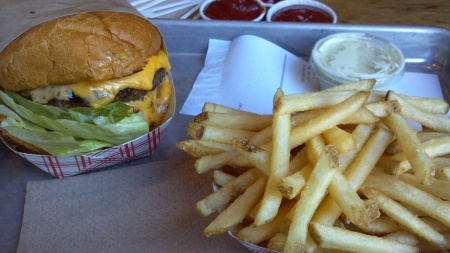 We ordered a double burger to share and some fries.  I figured that most places that offer a single and double griddled style patty, double is the way to go.  Well, I suppose I was right, but these patties were BIG for what we were expecting to be served.  Not a complaint, merely an observation. 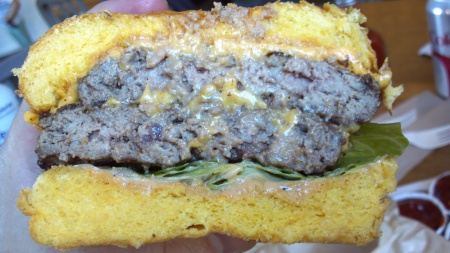 The burger was juicy, not overcooked or dry, really rich with beef flavor and the sandwich was prepared with care.  It stayed together, and you could tell by the inner workings of the meat, that they use pretty high quality (Nieman Ranch) beef. 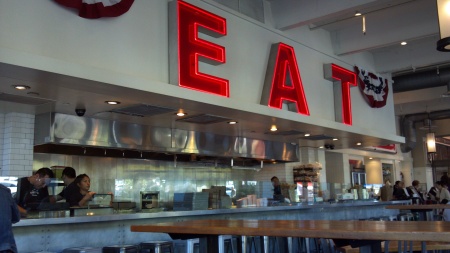 Though it was a bigger snack than we were planning – after all, it was our fourth food stop in about an hour and we still had a whole afternoon ahead of us.  The fries were hot and solid.  No frills, just well done spuds. 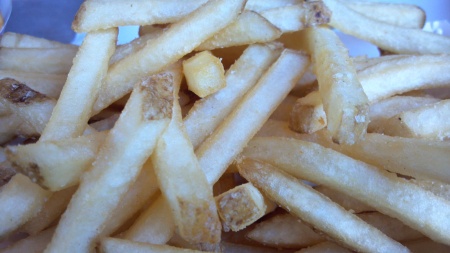 The Ferry Building is a no-brainer stop for the foodie visiting San Francisco.  If you’re in town on a Saturday go early and swing by the Farmer’s Market as well.  You will leave stuffed and ready for a full day of sightseeing in one of the nation’s greatest cities. 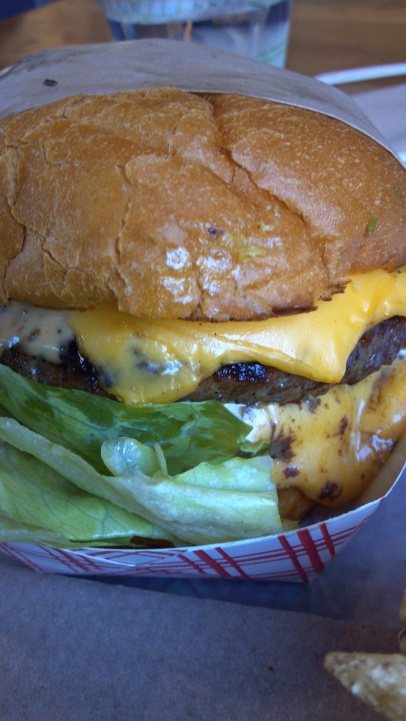